SARAH LIGHTFOOT WAGNER
Sarah grew up on an acreage in British Columbia where she developed a great love of and interest in wildlife and domestic animals. That upbringing lead her to pursue a career in veterinary medicine and artistic pursuits with animals as one of the major subjects.

Inspired by the muskoxen that were kept at the university while she was in attendance, Sarah decided to make a soapstone muskox carving. With the help of an experienced carver who provided mentoring, advice and some basic tools, Sarah began to explore the medium while back in BC. During that first summer of carving in 1999, she sold her soapstone sculptures through the Waterstreet Gallery in Vancouver.

Sarah continued carving while in veterinary school and sold pieces through the James Art Studio in Saskatoon. 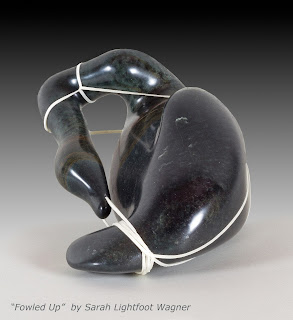 Now, over twenty years later, Sarah continues to carve soapstone and also creates art and craft using other media including wood, stained glass panel work and oil painting.
Combining the joy of working with her hands with her knowledge of animals has made Sarah’s artistic pursuits integrate with her veterinary career in a very satisfying way.
In 2014, 2016 and 2018, Sarah was invited to attend the Emma International Collaboration, a gathering of artists from around the world, held in northern Saskatchewan.

These week-long collaborations allowed her to delve into new media and explore new realms of creativity with the help and guidance from other talented and inspiring artists. 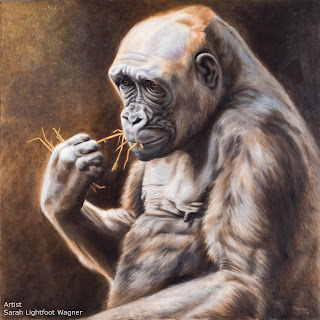 These collaborations provided new energy and ideas for her work, encouraging her to be bolder and to seek out new sources of inspiration.

In May of 2017, Sarah had two pieces selected to be featured in Dimensions. This biennial fine art and craft competition is sponsored by the Saskatchewan Craft Council. 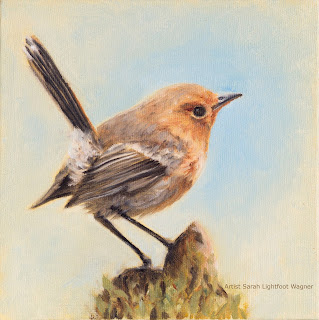 Sarah’s pieces were included with other selections in a show that travelled within the province and to other parts of Canada. 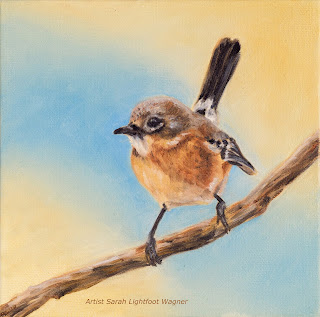 She is now a juried member of the Saskatchewan Craft Council.

In August of 2017, Sarah had her first solo exhibition at the Shurniak Art Gallery in Assiniboia, Saskatchewan. A source of inspiration for this exhibition were her two children which lead to the show entitled “My Children and Other Wildlife”, a collection of oil paintings and soapstone carvings. 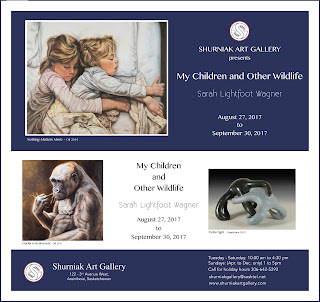 Sarah resides in Saskatoon with her husband and two daughters. She works as a veterinarian at a small animal clinic, pursuing her artistic interests when time allows. Sarah delights in hand-crafting things and is thrilled that her husband and two daughters (ages 12 and 14) have that same joy. She looks forward to future collaborations with other artists and hopes to encourage others in their pursuit of artistic accomplishment and enjoyment.

Join our committee to plan the Show. We meet the second Thursday of each month or as announced starting to 7:00 pm with a 1/2 hour networking session prior to the meeting. We try to finish by 9:30.

NOTE: If we are unable to find someone to organize some of the events such as the Workshops, Quick Draw or Pin Carving we will be unable to have them and they will be dropped from the show.